Does your dog chew on plastic objects, like toys and plastic bags? Find out what the potential reasons are and what you can do about it. We’ll also discuss pica and why it comes about in canines.

“My dog ate a piece of a plastic bag!” Can plastic kill dogs?

If your dog ate plastic or continues to eat plastic as a bad habit, you are probably concerned about how the plastic is affecting your canine’s health. We’ll figure out more about this behavior in today’s blog.

What Happens If My Dog Eats Plastic?

Nibbling and swallowing plastic are two things that people least likely want to see if they own dogs. Plastic is loaded with harmful chemicals, and there has always been evidence that plastic can harm all life, not just marine life. Mammals like dogs and cats are equally at risk.

If your dog has only consumed a very small quantity of plastic, then the plastic may be excreted with minimal damage to your dog. However, even the softest plastics and rubbers can cause issues. For example, suppose your dog consumes a dozen or more rubber bands or ponytails, and the ponytail’s circumference is large enough. In that case, the ingested material might become blocked as a result. Any severe blockages in the intestines or the colon are cause for concern. Blockages or bowel obstructions can be life-threatening and almost always require surgery to fix them.

Why does my dog chew plastic?

My dog likes to chew on water bottles!

Dogs like to explore the world with their noses and mouths, and part of this exploration is chewing on random foreign objects. Dogs would put anything in their mouth – toys, metallic objects, paper, rubber – you name it, and a dog somewhere has probably put that object in its mouth. Plastic is just one of many materials that dogs can chew on as it were the best thing in the world. It doesn’t matter if you have edible treats at home that go for several dollars per pack. What matters to your dog is that it can chew on a material that provides the kind of stimulation it likes.

In other situations, it’s also possible that a dog who likes chewing on inedible things has a disorder called pica. Pica is characterized by the compulsive chewing and eating of objects that are not ordinarily used as food. Pica behavior is observed in nearly all animals, including humans. It has also been observed in dogs that they tend to prefer objects with their owner’s scent on them. Though this might be a little difficult to trace, this would explain why some dogs continually engage in destructive chewing behavior – going through furniture, shoes, clothes, and other objects that belong to the human owner. If this is the case, then some conditioning may be required to stop the behavior.

Is a dog nutty by engaging in this type of behavior? Not all always. There is a theory that canines eat stuff with their owner’s scent on them simply because they think it’s food. By association, the dogs feel that anything with the owner’s scent is edible. Dogs are largely instinctual creators who work mainly by trigger and association. 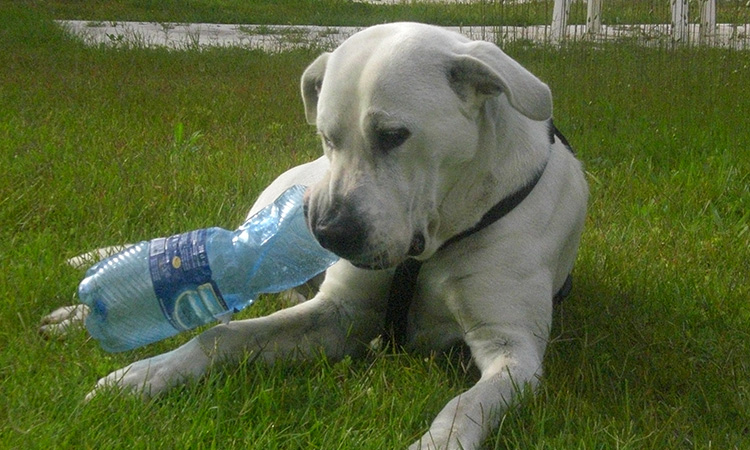 Can Dogs Die from Plastic?

Yes, large quantities of ingested plastic can become the cause of death of dogs big and small. Since plastic does not break down at all, even with the presence of gastric acids, there is a huge chance

A small piece of plastic might not be much cause for concern. If the plastic is small enough to pass through the dog’s intestines without causing any tears inside, then you shouldn’t be too worried. However, the ingestion of larger pieces of plastic or whole plastic items is a cause for concern. There have been cases of dogs feeding on plastic bags and hard plastic toys.

Dogs can be very insistent when they choose to chew on something, especially when they feel that the object has become a favorite toy. Dogs do develop an attachment to certain objects, as many dog owners will attest. The problem is when the object they love chewing tends to splinter and break apart. This is when digestive problems become a risk factor in your dog’s life.

A dog suffering from bowel obstruction may present various symptoms, including:

The foremost cause of bowel obstruction in dogs is not genetic conditions but rather foreign objects’ ingestion. A dog’s throat is expandable, so you might be surprised about how big the objects can get when a dog is determined to swallow them. It’s also possible to find foreign objects in a dog’s stomach or intestines that weren’t chewed on at all but rather swallowed whole. If a dog can go through an entire bowl of dog food as if it were just inhaling the dog food, imagine how much more it can swallow large chunks of plastic.

Is Chewing on Plastic Bad for Dogs?

In a nutshell, yes, we cannot say that eating anything that is made of plastic is good for dogs. It would help if you stopped any behavior like this before the behavior gets the best of your dog. Eating any quantity of plastic is bad for your dog, and if your dog keeps eating plastic, consult with your vet as an x-ray may be in order.

A dog that eats lots of plastic and rubber, and other inedible objects may be accumulating the material in their guts, and nobody knows about the accumulation. Any material accumulated in the gut can eventually cause a deadly obstruction, something that we can’t have if we want to be responsible dog owners.