Does plastic have the capacity to harm humans? What if you eat a bit of plastic? What happens to you afterward? We zoom in on the impacts of plastic on the human body and conclude the frontiers of science.

Can plastic kill you?

Everyone has probably found at least one piece of plastic in food, and there is always this lingering thought that you may have ingested plastic before that discovery. You may have also accidentally cooked plastic with food or outright swallowed plastic because you weren’t paying much attention to what you were doing while eating. How dangerous is plastic to humans? Can small amounts of plastic make you ill? Let’s find out in today’s important blog.

Plastic isn’t food, to begin with, so it’s safe to say that we don’t recommend allowing yourself to ingest any amount of plastic at any time. But sometimes, it’s not doable anymore because even the food we eat has microplastics in them. Microplastics are the result of plastics breaking down into very, very small particles. It might appear that the plastic is finally degrading, but no.

The reality is that the physical breakdown of plastics does not mean that the plastic is breaking down at the chemical level, which we’d want if we want the plastic to disappear properly.

However, plastic’s problem is that it will take centuries to literally a thousand years for plastic to break down at the molecular level fully. That’s right – when plastic breaks down to the level that we can’t see them properly anymore, they just became very small, but they are still very plastic.

So the question now is how safe are we when we ingest plastics? Doctors are of the agreement that it is impossible that there will be zero effect on humans. It’s just not possible, given the nature of the substance and how plastics are made in the first place.

Doctors also believe that when you ingest plastic, the risk of being exposed to noxious chemicals associated with plastic’s very slow breakdown is heightened significantly.

Think about it this way: when plastic is newly made, it enters a phase called “off-gassing,” where chemicals stream into the air for up to two years. We are exposed to plastic off-gassing every day, wherever we go. Plastic is just everywhere.

The chemicals found in plastic have no business being inside the human body. Whether inhaled or ingested, these chemicals have been linked to male and female reproduction problems, destruction of organ tissue, and delays in the normal development of children. Of course, the data used for these risk factors are taken from studies that watched people exposed to plastics. However, you don’t need to be a factory worker, for instance, to be exposed to plastics. Modern life just can’t let go of the material. 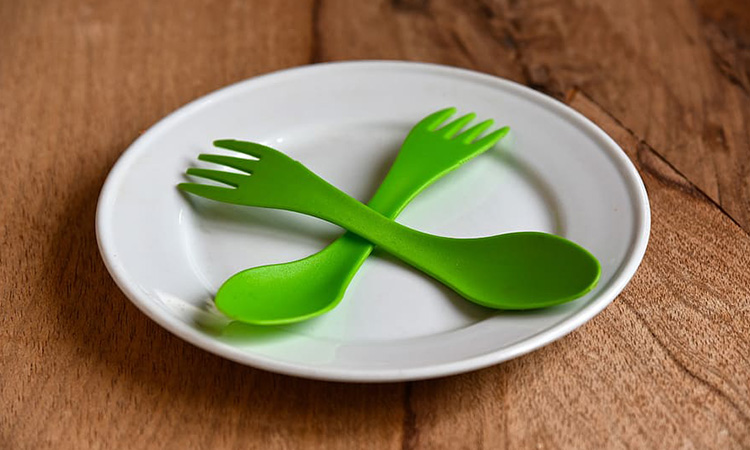 What Happens If I Drink Plastic?

Despite having stomach acid that can erode most metals, conventional plastics will come out the other end as if they weren’t acted upon by these gastric juices at all. If you accidentally ingested a small piece of plastic, you probably won’t have any long-term injury from it. However, if a person has pica and compulsively eats plastic, the long-term exposure to plastic and dyes and other materials associated with plastics can harm the health.

For example, plastics contain phthalates that are known for harming the reproductive system of males. Phthalates are classified as toxicants. This substance can harm women too. You can ingest phthalates if you accidentally bite off a piece of food packaging or if the substances leach to the food accidentally for whatever reason.

Dangers of Plastic Containers for Food

The dangers of plastics have long been identified, but they have been understated or downplayed for a long time because of plastics’ necessity in daily life. Researchers confirm that plastics aren’t as stable as we’d hope them to be, and chemicals from the plastic can leach or transfer to our food and drinks. The transferor leaching is mostly unavoidable, as even the highest quality plastics have this tendency. Microplastics and substances from plastics have been associated with various health conditions, including metabolic disorders. Chemicals from plastics seem to have a large impact on the reproductive organs, whether you are male or female.

Studies show that chemical leaching occurs more frequently and higher when the plastic is heated or exposed to higher temperatures. The temperature doesn’t have to be at the fire level – even the continuous exposure of plastic to hot sunlight can cause this chemical change in the plastic and the food contained in the plastic. This is why despite the safety guidelines associated with microwave-safe containers, there is still a risk that the microwaveable plastic is leaching chemicals to your food.

So should we be afraid of plastics? According to experts, yes, there is cause for concern. Whenever a small number of plastic chemicals leach into food or drink, that’s called micro-exposure. Micro-exposure won’t harm you outright. However, micro-exposure becomes all-out chemical exposure over the years. It is the chemical accumulation in the body that people should be wary about. Another angle that we should all be worried about is the simultaneous exposure of the body to different chemicals. The exposure ascends to the level of chemical mixtures, and not even doctors are fully aware of the effects. The biggest concern of doctors is the effect of these chemical mixtures on children since children are still developing.

How Much Plastic Do We Ingest?

It is estimated that Americans ingest at least 126 plastic particles per day. That’s just for ingestion. The rate of plastic inhalation is at least 132 bits, all the way to 170 bits.  Who would want to eat plastic, anyway? But it’s true – because plastic can break down to a size that would evade common human sight. When plastic is that small, it can begin to mingle with the air and water, and you won’t know that there’s plastic in the air anymore. Bits of plastic is odorless, and they lack flavor, too.