Marine plastic waste is one of the most alarming events in human history. Millions of tons of plastic waste reach oceans through runoff, wind activity, and waste left on the beaches. Just how bad is the situation right now for oceanic animals? Find out today.

How many fish does plastic kill?

Plastic killing animals is not news at all. We have known for many decades now that oceanic plastic waste is lethal to ocean life. Plastic doesn’t belong anywhere, whether it’s land or water, and it wreaks havoc in ecological systems wherever it is found.

How Many Fish Die from Plastic?

Plastic killing marine life is a most pitiful sight, but the horror goes much further than a few dead fish or turtles. A conservative estimate indicates that at least a million marine animals die yearly from plastic ingestion.

This shocking statistic reveals just how bad things are getting for our oceans. The amount of plastic reaching waters globally continues to increase, year by year, because there is no slowdown in our use of plastics. Whether it’s cigarette butts or plastic water bottles, the cycle continues unabated.

The most harm done is life affected by the plastic. Surely, nature will have its way with plastic waste. Nature will eventually recover. However, it is the life that exists now that is constantly at risk. Below are some statistics that will show the extent of the danger involved with plastics and our oceans:

How Many Turtles Die from Plastic?

We have all seen merciful images of turtles succumbing to fishing nets and plastics.

The estimates are incomplete because the oceans are vast, but experts interpolate that at least 1,000 sea turtles die every year by simply being near plastic waste. The main reason sea turtles are always at risk is that they tend to eat plastic bags, as plastic bags resemble jellyfish.

The iconic Galapagos Sea turtle is one such species that is constantly prone to eating and dying from plastic. Plastic has no nutritional value, and it can easily get stuck inside a turtle’s sensitive digestive chambers. Plastic bags that go in usually don’t come out. In some cases, the turtle may continue to fight for its life, but those turtles with too much plastic inside them will usually succumb.

Ingested plastic bags will eventually cause malnutrition, as more and more debris accumulate inside the turtle’s body. Since turtles have very specialized digestive organs, deaths from plastic are bound to happen. Many scientists have already documented the fatal blockages happening in turtles, where the plastics get stuck when the turtles attempt to dislodge and excrete them.

Another massive threat to the life of turtles is the fishing industry itself, in addition to the tons of waste that this industry creates annually. The fishing industry relies on huge nets that sweep the water for fish. Turtles are often not strong enough to ride out the presence of these nets. A turtle may try to escape, but often, it just gets trapped in the net. Once trapped in the net, sea turtles can drown and die, trapped in the nets. And it’s not just the turtles that are suffering here. Many sharks and even small whales can get trapped in fishing nets and discarded nets in the sea. 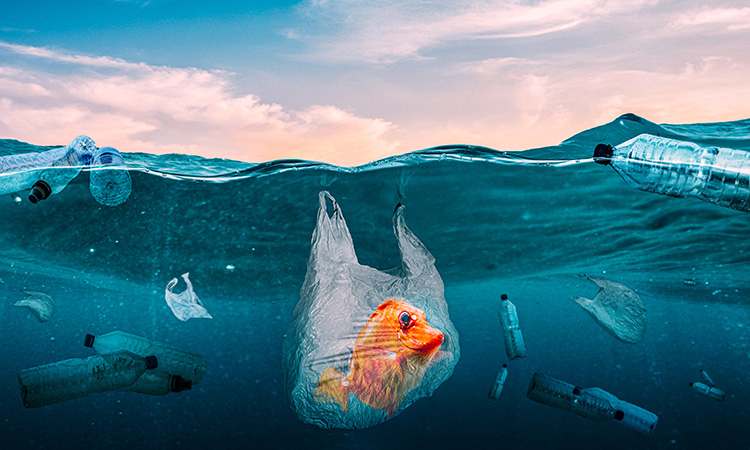 Current estimates peg the world’s production of plastic at 300 million tons per year. This is equivalent to everyone’s combined weight on the planet – and year by year, there is no slowdown in production. While efforts are taken to reduce the impact of plastics somehow, what is clear is that we have no clear plan to take care of the plastic waste that we have already produced. What can be done now is to reduce the plastic waste as much as possible, because we have too much already.

How much plastic is in the ocean?

The plastic waste measure in the ocean is different from the plastic that we have in landfills right now. The number is lower but no less alarming. Estimates for oceanic plastic waste is about 150 million metric tons.

In twenty more years, the figure is expected to increase to 600 million metric tons. No doubt, a smaller figure compared to what we have on land, but it is still millions of plastic wastes with nowhere to go, and marine life at the mercy of human-made plastic doesn’t break down in the water.

What Happens If a Fish Eats Plastic?

This is the most basic question for anyone who wants to understand how plastic affects marine life. Experts post several theories as to what happens to marine animals upon ingestion of plastic. If the plastic is minuscule, the plastic may not do anything to the animal at all.

If we’re talking about plankton and sea fleas, then the smaller particles of plastic will remain in their bodies. As we have discussed previously, in some instances, animals like sea turtles end up eating plastic bags and other plastic bits from the sea, which results in the fish’s death. Not all fish die when they eat plastic. Trawlers harvest some, and eventually, they reach fish markets.