Plastic waste is killing our oceans and marine ecosystems. It’s time that everyone learned about how plastic pollution is ruining us all.

What is the Plastic Ocean?

In the period of mega-storms and ecological degradation, it’s high time for people to become more of the world’s oceans. One of the best films that tackle the plastic problem in our world’s oceans is A Plastic Ocean (Tanya Streeter).

In A Plastic Ocean, Craig Leeson collaborates with diver Tanya Streeter to investigate twenty different locations globally to get to the bottom of the plastic waste problem. It turns out that our oceans are suffering, even dying, and we have to start doing some serious measures to save it for the next generation.

We are now dealing with tons of microplastics in the ocean, and microplastic is now finding its way into our food chain. We digest microplastic in seafood, and every living being that relies on the marine ecosystem is at risk.

Which Ocean Is Most Polluted with Plastic?

How Did All the Plastic Get into The Ocean?

How does plastic get into the ocean?

Plastic is now the number one problem of the world’s oceans, and it has been causing incalculable harm for decades now. Poor government response and lack of international treaties to solve plastic waste have resulted in having trillions of plastic particles in the Pacific Ocean and elsewhere.

What makes the problem worse is that single-use plastic has yet to be banned in many places, and both commercial and industrial plastic wastes continue to pollute both inland water sources and our oceans. But how does the waste made of plastic make it to the ocean in the first place? If most nations have some structure for solid waste management, why does the Great Pacific Garbage Patch exist?

Many factors cause the transfer of plastics to the world’s oceans. We start where all garbage stars: in our garbage bins. Plastic waste doesn’t magically end up in the oceans. The plastic waste has to be generated first by people. It is estimated that out of the 260 million pounds of plastic waste generated annually by common consumers, a minuscule 12% is recycled.

That leaves 88% left for solid waste management. According to experts, the usual suspects for transferring plastic waste to the ocean are human activity on beaches, farming practices, and marine transportation. Boats also throw their waste into the sea, and over time, the waste is accumulating. People seem to believe that the vast oceans can somehow magically dispose of plastic.

The plastic waste stays in the water for decades because plastic takes a long, long time to decompose. Natural phenomena such as flooding, and wind can also bring garbage to the ocean. The most lightweight plastic waste, including cigarette butts and candy wrappers, can easily be carried from land toward the water. 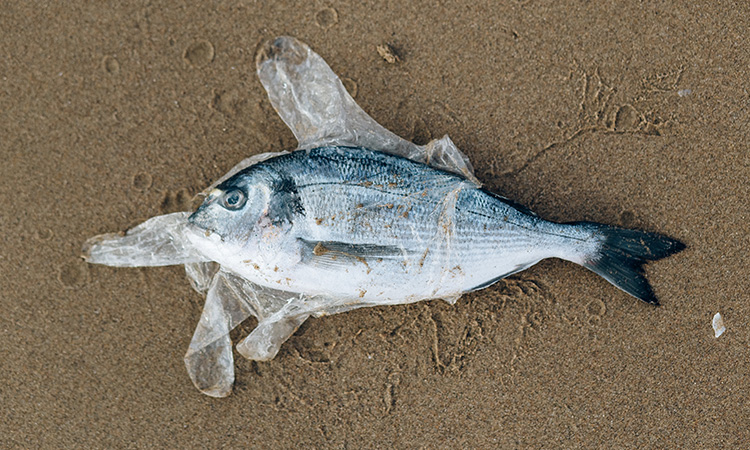 For a while, people thought that plastic waste decomposed after 50 to 100 years. It turns out that the plastic in our landfills requires much longer decomposition periods – up to 1,000 years.

People have relied so much on plastic that we use up 1.8 million barrels of oil annually to create the plastic used for manufacturing bottles. Single-use plastic products take one thousand years to decompose, while plastic bottles may require up to 450 years to decompose.

Sometimes, people ask if crushing plastic solves the problem. If the plastic is already beyond the size that people see, then they’re gone. Wrong. It doesn’t matter how big the plastic particles are; they’re going to cause problems regardless of size.

Oceanic movement can crush plastic and create nanoparticles or microscopic bits of plastic. At this size, plastic is still not considered fully decomposed. If it were, it wouldn’t appear in the tissues of marine animals.

As we have mentioned earlier, plastic has invaded the marine ecosystems, and it has found its way to the various marine food chains. Yes, we are also ingesting plastic whenever we eat seafood. We don’t see it, but this product, which is created from petroleum byproduct, is now in our tissue and blood, too. That’s how bad the plastic waste problem has become.

In comparison, products made from paper and paper derivatives only take up to six weeks to break down. Six weeks versus one thousand years is an immense amount of time.

How Many Animals Die from Plastic Pollution Each Year?

How many animals die from plastic?

It is estimated that upwards of one million animals die every year from run-ins with human-made plastic waste. All of these are marine animals, and they’re not just small animals like fish and turtles. Among the casualties are sharks and whales, too.

Different species of large marine animals die from ingesting plastics. The trend isn’t going to end unless something is finally done to quell the endless plastic waste that is poisoning our oceans and seas.

It has been estimated that fish ingest more than 20,000 tons of plastic waste yearly in the North Pacific territory alone. Plastic doesn’t just poison the flesh and organs of marine animals – the plastic also causes horrific internal injuries that eventually cause the premature death of these marine animals.

A recent survey of California seafood markets showed that up to ¼ of fish sold in these areas have microfiber plastic particles and pieces in their guts. Sea turtles are also highly vulnerable to plastic waste. Sea turtles often ingest plastic, thinking that they are jellyfish.

They either die from sustaining internal injuries from the plastic or die from starvation as they can feel ‘full’ after eating nutritionally useless plastic. At least 50% of marine sea turtles have ingested plastic globally.