Marine pollution is an alarming global problem that needs our utmost attention. How can we help control the amount of garbage reaching our seas?

The pollution that takes place every single day damages the environment and causes harm to the oceans and marine life. Eventually, everything comes back to us because we are dependent on our oceans and all the living things in it.

What Are the Main Causes of Marine Pollution?

The number one cause of marine pollution is human activity. Our oceans have no problem decomposing dead fish and marine life, and that’s not even on the list.

However, it is what humans do to the oceans. That is the problem. Fertilizers that are commonly used for agricultural production ultimately generate runoffs that find their way to seas and oceans.

Agricultural runoff also includes biocides and pesticides that can also pollute groundwater drinking supply and inland water formations such as rivers, ponds, and even lakes. What’s staggering about pollution is it usually finds its way to so many different locations, and ultimately, it is humans who will suffer because of it.

The second major cause of marine pollution is marine debris or trash. 80% of the garbage in our oceans can be traced to land-based production, unfortunately. Basic things like littering and poor waste management in towns and cities eventually cause garbage to be carried from inland locations to the sea through hydrologic processes, erosion, and water movement.

The garbage made from plastic is especially problematic. Single-use plastic, soda bottles, fishing gear, candy wrappers – all of these have accumulated in severe quantities in our oceans, leading to even more marine pollution. Among the many kinds of garbage in the sea, plastic waste is most harmful because it kills marine life in the process.

What Are the Effects of Marine Pollution?

Ocean pollution is a rising global problem, and we are reaching heights of pollution that may harm our marine food supply and our oceans as a whole. Decades ago, nearly no one believed that it was possible to overwhelm our oceans because there was so much water, to begin with. However, years of dumping tons of trash in our oceans have caused insurmountable damage to the environment. To add to the problem is that much of the trash dumped into the ocean is made of plastic that requires at least 450 years to decompose. This staggering amount of time means that no one will get to see their garbage decompose within their lifetime.

One of the most alarming effects of marine pollution is its impact on marine life. Marine animals, including the species of fish that we eat, are all affected. Sea turtles and large animals such as dolphins and whales are also suffering. Fish each broken down plastic, and the plastic can cause the rupturing of internal organs, leading to marine life’s premature death. Figures show that more than one million marine animals die each year after making contact with plastic. It has also been estimated that globally, 50% or more of sea turtles have ingested plastic. There is nothing good about ingesting plastic, especially if you are a marine animal with a very specific diet, to begin with.

Why do turtles eat plastic? Sea turtles feed on different kinds of jellyfish, and underwater, plastic bags resemble jellyfish. The resemblance confuses, and sea turtles end up adding single-use plastic bags to their diet. This causes malnutrition, starvation, and eventually death to sea turtles. Marine animals can also not expel plastic from their guts after ingestion, eventually causing their organs to rupture from being bloated by plastic finally. 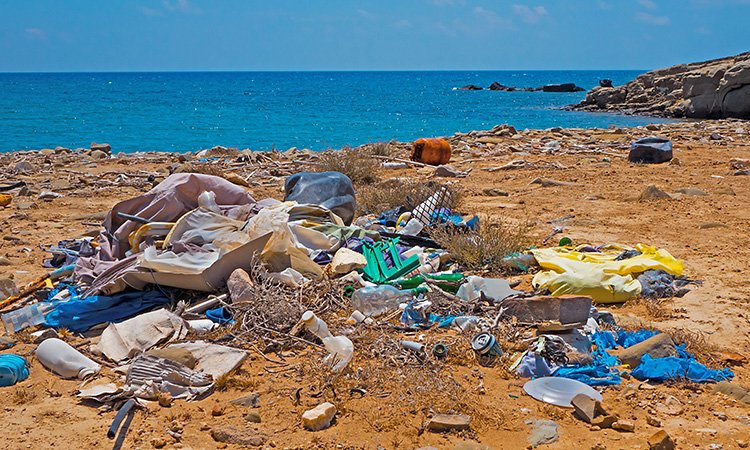 What Are 5 Things That Pollute the Ocean?

While there are thousands of types of garbage in the sea, we have some special mentions:

2. Man-made items that are not necessarily garbage but have found themselves flowing down to the sea. 20% of this trash comes from marine transportation and fishing activities and additional human activities related to tourism and smaller-scale fishing.

3. Plastic waste (all sorts) have produced microplastic debris that is threatening marine life as we know it. The production of massive quantities of plastic began in the middle of the 20th century. Because plastic doesn’t decompose, all of the plastic from the middle of the 20th century that have been thrown into the ocean is still there. It might sound funny, but it truly isn’t. These are troubling times for marine life.

4. Chemical waste is dumped by factories and other manufacturing plants into rivers, and rivers eventually drain into the sea.

5. Various types of garbage from beach activities and human habitation near the sea.

How Can We Stop Plastic Ocean Pollution?

While national and international action is needed for long-term change, there are some things that we can do now to help improve the health of our oceans. There needs to be a collective effort to change how we consume, so we won’t be so dependent on using plastic containers anymore. We are sure that we can make a big difference in our communities by reusing containers and recycling.

The small plastic cubs in fast-food and even the sandwich packets we use are all single-use plastics. Plastic cutlery is also problematic. When the demand for these plastic products dwindles, that would be the time that we can sit down and fix plastic pollution. Until then, we can help in our ways to reduce the impact of our consumption.