PLA is used for 3D printing almost anything now – including toys for dogs, cats, reptiles, and other animals. But how safe is PLA for animals? Can animals become sick after chewing on a PLA piece? Find out how PLA can affect humans and animals today.

Is PLA animal safe? Is PLA toxic to dogs?

Polylactic acid or PLA is a type of thermoplastic polymer that is derived from sources like cornstarch. Sugar cane is another source of PLA, which makes it wholly different from early polymers manufactured from petroleum distillates. While PLA is marketed as plastic, it doesn’t have the same chemical composition as other plastics in the market. PLA is a proper bioplastic or biodegradable plastic in the truest sense of the word.

Is PLA Toxic to Animals?

PLA has a variety of applications, from aesthetic 3D printing projects to medical screws. Due to the nature of their manufacturing, virgin PLA filaments are not toxic to animals or humans. However, the additional chemicals used to color PLA or fortify its durability may be poisonous to humans and animals. Therefore, it would be best to assume that any object made of PLA is toxic and may cause problems, especially if it has been investing in large quantities.

Pure PLA does not pose harm to humans and animals and can be considered safe and nontoxic. However, this only applies to pure and unadulterated PLA, not PLA that has been modified with dyes and other chemicals. It’s safe to say that the PLA, for instance, that has been used to manufacture a detergent bottle would not be safe to eat.
Also, PLA has dubious nutritional value and does not offer any substantial nutritive value to humans. Some people ask if they can eat PLA filaments if it’s the last thing on Earth and starving. You can, technically, if you are thinking of eating those spools of PLA, but you’re not going to get energy the way you will get energy if you consume raw cornstarch or flour, for instance.
The chemical structure of PLA has been modified, so it becomes thermoplastic. PLA was not manufactured as a genuine ‘edible article’ as one would think. Straws, plates, and cups made of wheat are not the same as PLA.
Those products are essentially made of compressed edible starches that are hardened to be used temporarily as wares and utensils for drinking and eating. They’re not meant to stay in that form for years, especially after they’ve been in contact with food and any moisture.
You can be sure that these edible wares will disintegrate after a single use, as they should. PLA, on the other hand, requires certain environmental conditions to begin disintegrating. If it just sits on a shelf in your home, away from heat and moisture, then it’s not going to break down the way you’d imagine it. 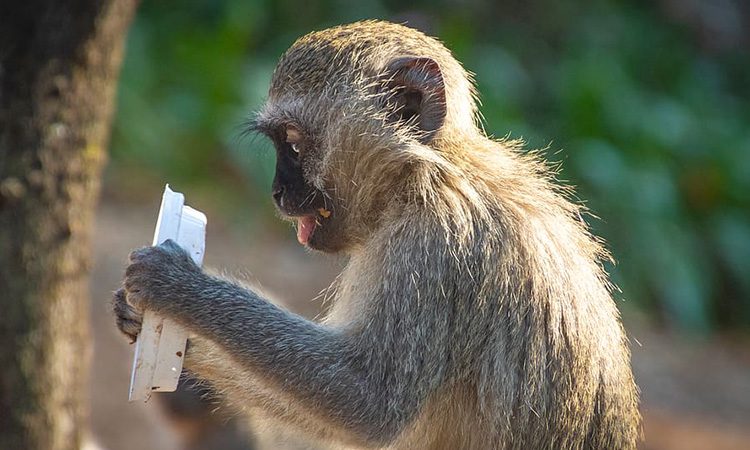 Is PLA safe for reptiles?

PLA is generally safe for reptiles, as long as they don’t eat it. If they accidentally ingest tiny pieces, it is unlikely to cause toxicity. However, thermoplastics are tough and can easily cause blockages and internal tears, so be careful when placing 3D-printed wares inside terrariums and other reptile cages.
It’s important that we only place safe and nontoxic items around our pet reptiles as they do not understand what thermoplastics are. They can accidentally eat bits that can break off from these decorations.

Does PLA Cause Cancer?

Is PLA filament toxic, and can it cause cancer?
In recent years, 3D printing has been scrutinized more closely by the medical community for the risk it poses to human health. While PLA is certainly one of the better choices for the environment, what does it do to the human body?
One study showed that, on average, 4.45 cases of cancer would occur every 10,000 individuals that have been exposed to 3D printers in general. More studies are needed to ascertain the actual risk posed by PLA and other thermoplastics used for 3D printing.
However, medical researchers agree that emitted particles from the process of 3D printing are potentially noxious. The risk factor is computed by the concentration of noxious fumes from 3D printing processes multiplied by the lifetime risk of exposure to the said pollutants. The emissions from 3D printing are categorized as a form of environmental pollution, as well.

Is PLA Bad for Environment?

In a nutshell, no, PLA is not bad for the environment. If we look at how other plastics react to the environment and how they are processed after use, we will see immediately that PLA is one of the safest bets for the environment. PLA is a carbon-neutral thermoplastic, which means that when this thermoplastic is incinerated, it won’t emit carbon like other materials. From the perspective of those worried about global warming, this is good news. Indeed, PLA can be manufactured to fill the gaps in packaging various types of products, from food to inedible items.
However, it should be noted that PLA is not the holy grail of environmentalism as it is not a perfect thermoplastic. For one, PLA will only begin breaking down at an accelerated rate if exposed to the processes in a certified industrial recycling facility. The heat requirement to begin breaking down PLA is 140°F or 60°C. Furthermore, the recycling facility also has to continually feed the vats that contain PLA with the bacterial strain capable of consuming the PLA once it is heated.

What about PLA in a landfill? Scientists aren’t very sure how long it will take to break down PLA without more precise temperature and the presence of the bacteria that can break it down. Some say it will take one hundred years to break down, while others think it’s likely to last one thousand years or more. This is the same range as ordinary plastics, so it’s not very comforting to people who think that it will break down immediately. PLA can break down within months if there’s plenty of oxygen and bacteria around. However, if it is left to its devices, it won’t. It’s unlike that PLA in the ocean will decompose the way we’d like it to.

1 thought on “Is PLA Animal Safe?”